Various areas around Scotland have experienced a number of outbreaks of bacterial infections related to substance use in recent years, which include Anthrax, Botulism and Group A Streptococcus. 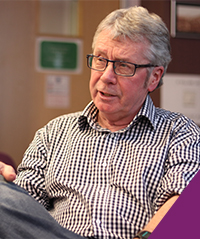 In order to support local areas affected and to disseminate effective harm reduction information to staff and people who use drugs, SDF has recruited a National Training and Development Officer for Harm Reduction and Emergency Responses.

Our media volunteer, John Thomson, caught up with Sophie Given to find out more about her role and to see what progress is being made to reduce the potential harms caused by drug use.

‘Back to the basics’ is a phrase from the dim and distant political past but for it is very much a modern day mantra for dealing with outbreaks in bacterial infection.

Sophie’s interest in bacterial infection began when she was a nurse working within trauma, where she was often called upon to treat wounds. At first, she thought that her role was just to treat the injury – ‘to heal what was in front of her’ – but she soon realised that there was more to it than that.

‘When you talk with some vulnerable people who present at A & E, you discover they may be homeless and that there’s a palpable stigma they feel attached to them from the moment they walk in. So doctors and nurses have started to realise that they are also social care workers; their jobs have grown arms and legs. No longer does a patient come in and need treatment for that one thing. I have to make sure they have some place to stay; somewhere they can recover and feel safe. It should be holistic within a team and sadly that doesn’t happen very often.’

So, there are many challenges ahead for Sophie.

Take, for example, the difficulties for people who inject drugs. By injecting they create an entry point and open themselves to many possible outcomes which can lead to an infected or traumatic wound. This, after all, is why needle exchanges exist – at the very least to encourage people to be careful when choosing to use.

Sophie now chairs the Needle Exchange Workers’ Forum – and she wants to set fresh agendas for that. For example, she wants to organise knowledge workshops to discuss and outline, for example, what harm reduction advice is needed most. There may be gaps in knowledge for workers and the aim is for them to learn something they can take away to their practice.

‘Each workshop will have a theme and the first one will be crack cocaine use – what it is, how prevalent is it, how we should be dealing with it and how we’re monitoring it.’

It’s not long before the conversation returns to the subject of bacterial infections and what happens in the event of an outbreak – which predominantly occurs among people who inject drugs. Soft tissue infection amongst people who inject drugs means that up to 25 per cent of people experience a sore or open wound. Every year one in ten people from this group require hospital admission. According to Sophie, ‘it’s a huge problem.’

‘It’s about collating information and getting that information to workers and the people affected by the outbreak, briefing those involved so that the outbreak can be contained, further infections prevented and, importantly, lessons learned by everyone involved.’

‘In times when there are no current outbreaks, there is no time for complacency – among staff or people who inject. Sometimes you have to be proactive as opposed to reactive.’

Sophie is keen to draw attention to initiatives such as that run by Abbey Pharmacy in Glasgow. They have an in-house harm reduction nurse so ‘people can just drop in without appointments. They’re not NHS-related so there’s none of this “if I come in with an injecting wound, they’ll know that I’m still injecting and might change my script.” As they’re not NHS linked it seems to be really successful and they’ve been treating a lot of wounds.’

Coming from an acute nursing background, Sophie has a pragmatic approach to what she’s doing. Maybe that’s where ‘back to the basics’ comes in. There’s a great deal of discussion in Scotland at the moment about Safer Drug Consumption Facilities, but Sophie sees some of it from a nurse’s viewpoint;

‘If I was a nurse working in a consumption facility, I’d say that anyone wishing to use the service washes their hands before they inject – the facilities primarily prevent overdoses but they are also an incredibly important tool in reducing bacterial infection and transmission. It would be interesting to see how the reduction in general bacterial infection would be as a result of the ability of people to maintain good hygiene.”

‘A lot of people inject in bathrooms because there’s a water supply but is it a clean bathroom and are you washing your hands before you inject? If not, why not? Is it because you’ve not got soap? We need start a very basic level of conversation and go from there.

Sophie leaves our conversation on one final point that should resonate among all colleagues.

‘It’s about giving people the education to make an informed decision.’

You too can get educated on bacterial infections and substance use through a variety of channels.

SDF has launched a new training platform which hosts free-to-access e-learning courses, which include the ‘Bacterial Infection and Drug Use’ course. This provides an overview of the main signs and symptoms of bacterial infection that practitioners should be aware of and encourages participants to develop responses relevant to their services.

You can also get in touch with Sophie directly to arrange face-to-face training and briefings at sophieg@sdf.org.uk.