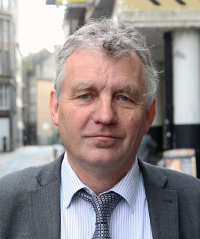 David leads the SDF staff team and reports directly to SDF’s Board of Directors. He has worked for Scottish Drugs Forum since its inception in 1986 and in the field of drugs, alcohol and homelessness for over 35 years in England, Ireland and Scotland. He served on the UK Government’s Advisory Council on the Misuse of Drugs from 2008 until 2017. He is a Board Member of the national anti-poverty network in Scotland, The Poverty Alliance.

He was a key player in the development of harm reduction services in Scotland, advocating the introduction of needle exchanges and substitute prescribing programmes. Since the creation of the Scottish Parliament in 1999, he has been a Secretary to the Cross Party Group on Alcohol and Drug Misuse. He pioneered approaches to the involvement of people with experience of drug problems in influencing the planning and delivery of services – particularly through SDF’s peer research approach.

An active member of the European Civil Society Forum on Drugs, David is a regular media commentator on issues relating to problematic drugs use in Scotland. He has contributed to a number of publications on drug use in Scotland. David was made Officer of Order of the British Empire (OBE) in the Queen’s 2012 Birthday Honours for services to disadvantaged people in Scotland.