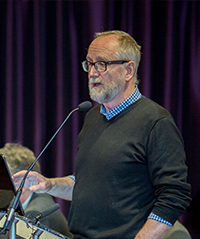 It is with sadness that we pay tribute to John Preston, SDF’s Treasurer, who has died.

John joined the SDF Board in 2009 in his retirement from a distinguished career in the music industry. He subsequently became Treasurer of SDF and made his last public appearance in this role in February at our Annual General Meeting in Glasgow.

John was a modest man and had a knack of telling stories, from what must have been a sometimes glamourous career, in a manner that was neither egotistical nor fantastic. Others have paid warm tribute to John from his times in the music industry, these can be found at the foot of this tribute. He seems to have maintained a sense of proportion and decency that were obvious from his work here at SDF.

John, in the mid-1970s, worked at Bruce’s Record Shop in Edinburgh before moving south in 1977. He then worked at EMI Records before joining Decca.  He was Managing Director of Polydor Records UK (1984-85), and then of RCA Records UK (1985-89) before becoming Chairman of BMG Entertainment (1989-98.) He was member of BPI (British Phonographic Industry) Council and served as BPI Chairman (1996-97). John was also a trustee of the music industry charity The BRIT Trust (1994-98)

Harry Shapiro who introduced John to SDF explains “John was Chair of the BPI, the association representing the UK record labels and it was in that capacity that I came to know John as he was instrumental in awarding valuable grant money to the Institute for the Study of Drug Dependence (ISDD) via the Brit Trust. John and his colleagues John Deacon and Maggie Crowe really understood what ISDD was all about, that we were not an ‘anti-drugs’ charity, but were all about providing credible, up to date and evidence-based drug information that worked in the real world. This resonated very well in the music industry which was often under fire for the escapades of some of the big names signed to the labels. When John moved back to Scotland, he asked me to recommend a charity he could support and I was very happy to suggest Scottish Drugs Forum.”

Current Scottish Drugs Forum Chair, George Allan, remembers John as bringing something new and different to the Board Room “John brought a humourous streak which never failed to enliven proceedings. Most of the Board had a social care or a health background and John, with his very different professional experience, brought contrasting perspectives to many of the issues one faces on the board of a charity. This allowed him to ask refreshing and sometimes awkward questions which others hadn’t considered. This undoubtedly strengthened the Board and SDF as an organisation. John encouraged people to have a wider outlook and to think through and articulate the rationale for their own positions.

“Personally, John and I regularly sparred at meetings – which I greatly enjoyed. This sparring always ended in mutual laughter.

“John became Treasurer somewhat reluctantly as he hadn’t seen it as his area of expertise but, having taken it on, he worked effectively and supportively with other Board members and staff, with whom he enjoyed good relations.”

Dave Liddell, SDF CEO, remembers John’s company on the train home to Edinburgh after Board meetings in Glasgow “John was always good company and had good stories – sometimes about his career or about his latest sailing trip –to the Baltic or wherever. I remember him recalling the eerie feeling of being in the middle of a heavy sea on the yacht that he had designed and built himself, ably assisted by his partner Roz, over a seven year period, and hearing it creak in a way he had never heard before and suddenly having a little self doubt about his own skills as a boat builder!

“He could start an impassioned discussion but it was never personal and he always knew how to end it. I recall him checking with me ‘I do hope I didn’t push anyone too far, this evening’ – he never had.”

John is survived by Roz and family to whom we send all our condolences.

Obituaries and tributes to John have been  made from many sources including The Times, BPI, The Eurythmics and The Music Publishers Association.