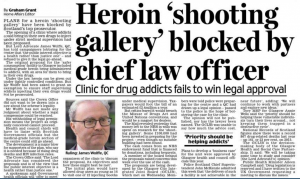 It has been reported in the media that Scotland’s Lord Advocate has blocked plans for a safer drug consumption facility in Glasgow, which was approved by Glasgow’s Integrated Joint Board in October 2016.

David Liddell, CEO of Scottish Drugs Forum, said: ‘This is a hugely depressing decision.  It means that a drug consumption room cannot be delivered in a timescale that will respond to the pressing needs of a group who are among the most vulnerable in our society.

“One of the benefits of this service would have been to help contain Glasgow’s HIV outbreak.  We have spent a year awaiting this decision.  We  should  redouble our efforts and deliver heroin-assisted treatment now to this population. There are no legal barriers to this provision.

“We also need a wider vision of how we reach out to Scotland’s most vulnerable people and help them address the significant health and social challenges they face.”