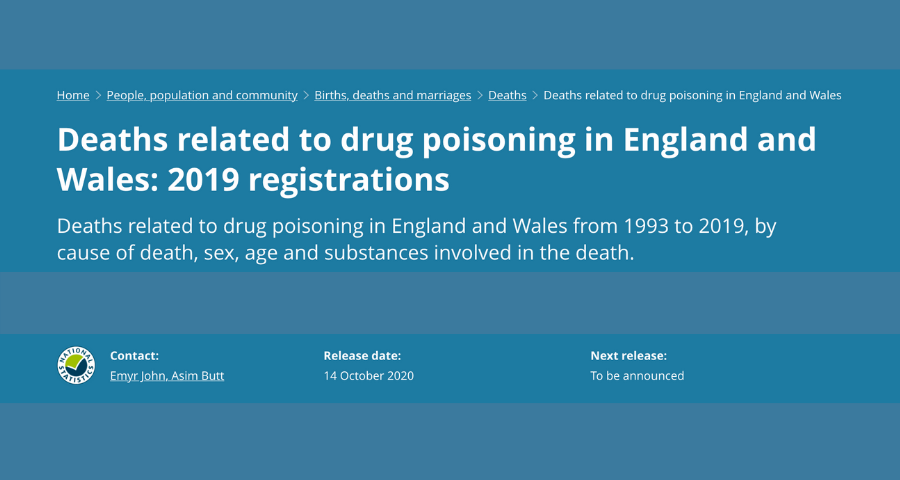 Drug-related deaths in England and Wales have hit a record high, with 4,493 people tragically losing their lives as the result of a drug poisoning in 2019.

The figure is the highest since comparable records began in 1993, according to the annual report from the Office for National Statistics (ONS).

Two-thirds, or 2,883, of the deaths were related to ‘drug misuse’, a small fall since 2018 but not a statistically significant decline.

According to the ONS, a death classified as ‘drug misuse’ must be a drug poisoning and meet either one (or both) of the following conditions: the underlying cause is ‘drug abuse’ or drug dependence, or any of the substances controlled under the Misuse of Drugs Act 1971 are involved.

Cocaine deaths continue to rise, hitting another record high of 708 in 2019. And there was similar disproportionality among cocaine deaths for women, with cocaine deaths rising by 7.7% among men but increasing 26.5% for women. It is not possible to distinguish the form of cocaine, for example, powder cocaine or crack cocaine, in relation to the deaths.

The rates of drug ‘misuse’ deaths continue to highlight a marked north-south divide in England.

The north-east has had the highest rate of drug ‘misuse’ deaths of any English region for the past seven consecutive years. In 2019, the rate was 95 deaths per million people, compared with 33.6 in the east of England, which had the lowest rate.

The drug-related death figures for Scotland in 2019 have been delayed as a result of issues regarding forensic toxicology, however they are currently scheduled to be published in December 2020.