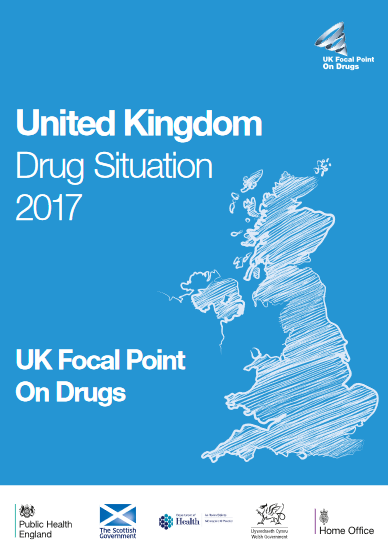 An overview of illicit drug use across the whole of the UK in 2017 has been published by the UK Focal Point on Drugs, who are based within Public Health England.

Key points relating to the UK as a whole:

– Using the European Monitoring Centre for Drugs and Drug Addiction (EMCDDA) definition, the total number of drug-related deaths (DRDs) that occurred in the UK during 2015 was 3,070, a 13% increase from 2014 and the highest number reported to date.

– Across the UK there were 2,656 deaths reported which featured an opioid (87% of UK cases). As in previous years, the substance with the largest number of associated deaths was heroin. In contrast to the UK as a whole, tramadol was the most commonly mentioned opioid in Northern Ireland.

– There was a substantial increase in the number of deaths registered in Scotland in 2016 that involved a benzodiazepine, rising from 191 deaths in 2015 to 426 in 2016. Etizolam, classified as an NPS, was implicated in, or contributed to, the largest proportion of these cases (n=225, up from 43 cases in 2015).

– National take-home naloxone programmes continue to supply naloxone to those exiting prison in Scotland and Wales: there were 720 kits issued by NHS staff in prisons in Scotland, and 655 in Wales, in 2016/17.

– Use of synthetic cannabinoid receptor agonists (SCRAs) in prisons remains a problem. Testing data published this year suggested that SCRAs are the most commonly used substance in prisons, with 16% of prisoners testing positive for these substances on release from prison, compared to nine per cent on arrival.