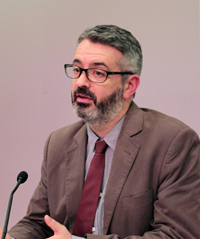 Peter Kelly has been Director of the Poverty Alliance, Scotland’s anti-poverty network, since 2004.  He previously worked as a researcher with a number of organisations: with the Scottish Low Pay Unit, with Strathclyde Regional Council and with a community health organisation in the early 1990s.

His main policy interests are in income inequality, employment and poverty, and civic participation in policy development.  He has published a number of articles on poverty and low pay in Scotland.  In addition to Scottish work, Peter is also actively involved in a range of UK and European anti-poverty networks and is currently a board member of the End Child Poverty Campaign and is on the UK representative on the Executive Committee of the European Anti-Poverty Network.

He has a BA (Hons) Applied Social Studies from Paisley College and an MPhil Social Science Research from the University of Glasgow.