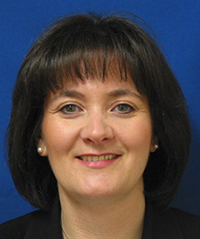 Hazel Robertson has been employed as a social worker within a local authority setting since 1986 and first worked with SDF in 1988, to support the establishment of a carers support group in Perth and Kinross for those affected by substance use. She was subsequently invited to serve on SDF Board at an early stage in the development of the organisation. This was followed in 1990, by her appointment to a specialist post focusing on drugs and HIV. From 1992, as Senior Social Worker, she managed the Tayside social work HIV/AIDS service and latterly (from 1999) also managed the social work drug and alcohol services in Dundee.

In 2004, she was appointed to Principal Officer for Community Care within Angus Council where she had responsibility for the strategic planning and development of community care services and had a lead role for drugs and alcohol services. Hazel has had a career long interest in the needs of children affected by substance misuse and is currently Head of Services for Children, Young People and Families in Perth and Kinross Council for Children, Young People and Families.

Hazel has been a Board Member since 2011.