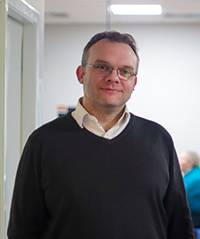 Gareth Brown joined SDF’s Board of Directors in 2020.

He has been a career civil servant in Scotland since 1999 and for much of that time he has worked on issues relevant to the activities of Scottish Drugs Forum. From 2007 to 2019 Gareth had policy roles within public health within Scottish Government, dealing with matters such as vaccination and immunisation, infectious diseases, and outbreak response (including dealing with the outbreak of anthrax in injecting drug users in 2009/10). During this period Gareth was responsible for working with professionals and patient groups to develop Scotland’s world-leading approach to tackling Hepatitis C, and he was involved in delivering first World Hepatitis Summit in Glasgow in 2015.

In 2016, Gareth was appointed as the Deputy Director for the new Health Protection Division in the Population Health Improvement Directorate of the Scottish Government and in that role he led work to establish the new national public health body, Public Health Scotland.

In August 2019, Gareth moved to take up a new role as Deputy Director for More Homes Division within Scottish Government, leading on issues such as affordable and social housing and measures to improve the housing system.

Outside of work Gareth once starred as ‘confused man’ in an award-winning short film; once played on stage at T-in-the-Park; and once snorkled between the American and European continental plates in Iceland. He spends most of his free time reading, playing tug of war with his dog, and planning holidays with his wife.